In 2009 my family moved from Austin, TX to Kampala, Uganda. Having spent the previous decade doing mar/com work for the software industry, moving to a developing nation on the other side of the world altered the trajectory of my career path forever, to say the least.

There weren’t many software startups in Uganda 9 years ago, but there were countless non-governmental organizations (NGOs) and community-based organizations (CBOs) working to improve the lives of those suffering from disease, extreme poverty, and a variety of outrageous injustices. These were the organizations my heart was and still is called to work with.

One of my first major projects took place in 2011 and involved a unique collaboration between 6 NGOs. It was called the Tumaini Awards Initiative and eventually evolved from an awards program honoring those working to improve the lives of children to a national advocacy initiative that ran in conjunction with Day of the African Child every year until recently.

While the program wasn’t a money maker for the 6 nonprofits (nor was it meant to be) it did serve fantastically to:

If raising money was a money was a goal of the program, I have no doubt they could have achieved their funding goals as well.

Today, I live in a city where several organizations are working to address homelessness. Several others focus on domestic violence, and others are working to rescue animals.

Imagine the exponential impact these organizations could have if they put their rivalries for donors and dollars aside to collaborate for a common cause.

Heck, imagine the impact it could have on you, personally. As the wise and highly esteemed philosophical guru, Amy Poehler, once said:

“Find a group of people who challenge and inspire you, spend a lot of time with them, and it will change your life.”

Through a personal blog our family kept to update friends and family abroad on our work and lives, I shared the following story about how World Vision Uganda, Save the Children Uganda, Child Fund Uganda, Compassion International and two local NGOs joined forces to honor and recognize those working to improve the lives of children and to inspire others to do the same.

Note: This piece was written before I embraced the Oxford Comma. Please don’t judge. I’m a reformed AP-style writer.

There must be hundreds, if not thousands of people working to improve the lives of children here in Uganda.

I see them every day. Small, community-based organizations (CBOs) feeding and educating orphans and vulnerable children (OVCs); individuals and families taking in and raising the orphaned and abandoned; pastors working tirelessly to feed street children when they barely make enough support and feed themselves.

While I often come across earthly saints who’ve sacrificed everything for the sake of a child through my work, the works of most good Samaritans go largely unnoticed.

I thought these people deserved some appreciation, so in January 2011 I approached World Vision Uganda’s executive director, Rudo Kwaramba, with an idea for a program meant to recognize and honor individuals, NGOs, CBOs, corporations and members of the media who have made significant efforts to improve the lives of children in Uganda.

Rudo liked the idea and agreed to sponsor the project in conjunction with five other child-focused NGOs including Child Fund Uganda, Save the Children Uganda, Compassion International, the Ugandan Child Right’s NGO Network (UCRNN) & the African Network for the Prevention and Protection of Child Abuse & Neglect (ANPPCAN).

The program was named the Tumaini Awards Initiative. Tumaini is Kiswahili for hope. Here’s an article about the program: https://www.newvision.co.ug/new_vision/news/1014433/ngos-launch-children-awards

The executive directors of the six participating organizations made up our steering committee, providing vision and guidance for the program. The working committee was comprised of one person from each agency’s communications department and me.

For months we worked together to develop program rules, categories, criteria and promotional materials. We managed distribution and in-take channels throughout the country, assembled a judging panel and coordinate all the other necessary details for the first annual Tumaini Awards Initiative. In the end, we received more than 800 nomination forms from people and organizations around the country.

Articles about the issue the program centered around, the right to an education for all children, ran weekly in local publications for three months along with feature stories about the contestants nominated and the important work they were doing.

And William Mwessa, a refugee from the Democratic Republic of Congo, raising 52 orphans on his own. https://www.newvision.co.ug/new_vision/news/1012982/mwessa-eur-happy-orphans

The Tumaini Awards Initiative culminated in conjunction with the Day of the African Child on June 10, 2011, with a gala that included the award recipients, dignitaries, members of parliament (including our guest of honor, Uganda’s Deputy Speaker of Parliament, Jacob Oulanyah) and other officials.

For me, the gala was a deeply moving tribute to those who’ve dedicated their careers, and in some cases, lives, to helping children in need.

Before an audience of 300+ guests, 15 individuals (including 2 children,) 10 NGOs, 7 CBOs and 5 businesses received much-deserved recognition for their child-focused initiatives and programs. Perhaps more importantly, the powerful testimonies of these 37 award winners inspired countless others to do the same.

People like Sam Kateu, a disabled man who started a school for deaf children12 years ago and has since helped more than 100 deaf children achieve literacy.

And small but powerful NGO’s like Cherish Uganda, which provides homes for HIV/AIDS orphans and is making great strides in de-stigmatizing the disease. www.cherishuganda.org

Children constitute 56% of Uganda’s total population, and the majority of Ugandans live in deplorable conditions, characterized by an infant mortality rate of 135 deaths in every 1000 births, a 67.6% primary school drop-out rate, a 25% teen-pregnancy rate and an increasing number of reported child abuse cases involving defilement, neglect, physical abuse, child labor and child trafficking. 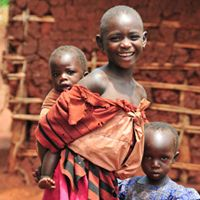 An estimated 10,000 children are living on the streets of Uganda’s major towns. According to the World Health Organization, 134 out of every 1,000 children die in Uganda before reaching the age of 5.

Clearly, much work remains to be done.

It was a great privilege to shine a light on people working so passionately and indefatigably to reduce these horrific statistics.

As Uganda’s Commissioner for Youth and Children’s Affairs (and the lead judge for the program) Mondo Kyateka, so said, “There is no better calling than working with and supporting children; they constitute the future.”

The New Vision newspaper called the event a “night of hope for children.” But it’s my hope that this night was just the beginning of ongoing efforts to continue honoring and recognizing those serving children, and inspiring others to do the same.

More on the event at https://www.newvision.co.ug/new_vision/news/1010079/night-hope-children